Skip to content (Press Enter)
HomeUncategorizedWhich Games Will Be In Demand This Christmas?


CHRISTMAS is almost here. The shops are filled with festive tunes, decorations, and stressed-out shoppers; the streets are oozing excitement; and our homes are becoming cosy little grottos again.

And although we’ll all be tucking into turkey and Christmas pudding this December, another popular festive tradition is expected to continue this year, too – gaming.

Playing games of all kinds is a very common activity during the Christmas period, with several factors driving their demand.

Firstly, as the nights continue to get longer and the air gets even colder, more of us will be switching from our outdoor hobbies to ones that allow us to stay warm and comfortable indoors. Some might choose to watch films, others will read, but many more will play games.

Secondly, games and the hardware to play them are often given as gifts for Christmas. This is why Sony and Microsoft typically release their new consoles and companies like Activision and EA schedule their biggest games to launch in the run-up to Christmas.

On top of these factors, games are also a great way to bring people together, which is why many of us in Evesham, Worcestershire, and the rest of the UK will play them after we’ve stuffed ourselves with too much turkey and trimmings.

But which games will be popular this Christmas?

Card games are always a firm favourite. A deck of cards is cheap to buy and they’re incredibly versatile, offering hundreds of different options.

One of the most common choices expected among British players will be poker. It can be enjoyed around the table once all the plates have been put away, so there’s no complicated set up.

It’s also a game that most people are familiar with, even if they need to spend a few rounds getting back up to speed with the rules.

Of course, there are many different flavours of poker, so there’ll be a lot of different playing choices across the country.

However, we can expect Texas Hold’em to be the most-played option as it is already the most popular variant in the world thanks to its TV fame and easy-to-learn rules.

It’s also a community game, making it more strategic and challenging than some other versions.

FIFA 23 will be the final game bearing the FIFA name that’s released by EA Sports. It won’t, of course, be the last football title released by the company, but this year’s release does mark the end of a very successful era.

The game is always popular this time of year since the football season is always in full swing come December. It’s also a common choice for people wanting to give a gift to a fan of the beautiful game.

In 2022, this popularity is likely to be even higher as the World Cup will be reaching its climax as most people complete their Christmas shopping. 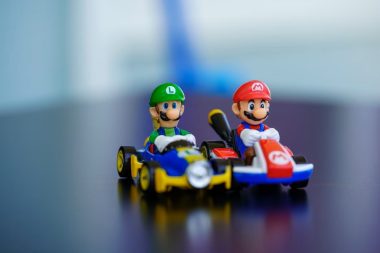 Mario Kart is one of the most successful video game series of all time thanks to the fact that it features some of the best-known and most-loved characters along with a careful balance of racing and chaos that appeals to a very broad audience.

This Christmas, we can expect many groups to be gathered around their TVs as they get behind the wheel with Mario, Luigi, Princess Peach, Yoshi, and Toad to race around some of the wackiest tracks ever created.

Mario Kart 8 for Nintendo Switch recently enjoyed some updates that added new tracks and other features, helping to keep it in high demand. We can, therefore, expect it to be a firm favourite again this holiday season.

Minecraft is one of the oldest video games still on the market, yet it continues to be one of the most bought, downloaded, and played titles on the planet.

Over its 11-year lifespan, the game has been ported to just about every possible device from smartphones to consoles, making it one of the most accessible video games available to players this Christmas.

It’s a game that allows for almost unlimited creative expression, offering players a blank canvas to build just about anything they can imagine.

With that in mind, it’s no surprise that Minecraft is expected to remain a popular choice this year.

facebook.com/EveshamObs
to get daily news updates straight to your news feed.