British fashion brand Burberry has collaborated with video game Minecraft to release a collection of in-game clothes, a playable “Burberry x Minecraft universe”, and a range of limited-edition physical garments.

The 15-piece digital collection was developed for players of the popular world-building survival game Minecraft and includes pieces featuring the Thomas Burberry Monogram, which is made up of the Burberry founder’s initials TB.

“Bridging the digital and physical worlds, Burberry and Minecraft encourage communities to showcase their self-expression and equip the modern explorer with in-game skins and character creator items,” Burberry said.

“Comprising of an in-game adventure called Burberry: Freedom to Go Beyond, the collaboration allows consumers to both physically and digitally immerse themselves in a distinctly Burberry x Minecraft universe.”

Players can choose from five different looks, including plain white T-shirts, checked scarves, sweaters adorned with the Burberry logo and knee-length skirts among other items.

The garments can be worn in-game by avatars – digital versions of each user that can be customised with clothes and accessories.

Avatars wearing the collection can complete a range of challenges, such as a maze clad in Burberry’s signature check pattern, in four worlds designed in collaboration with Minecraft mapmakers Blockception.

“Burberry: Freedom to Go Beyond takes inspiration from Burberry’s pioneering heritage and reimagines journeys into nature through the power of adventure,” Burberry said.

“Commencing in a fantastical version of the City of London, the game is punctuated by creative references to the brand’s universe – including an Equestrian Knight character, Thomas Burberry Monogram maze and a range of members from the Burberry animal kingdom.”

Customers are also able to purchase physical items from the collection including the Waterloo Trench Coat, logo-print sweatshirts, hoodies, hats and scarves from the Burberry website, in a move the brand described as “bridging the digital and physical worlds”.

“Bridging the digital and physical worlds, Burberry and Minecraft encourage communities to showcase their self-expression and equip the modern explorer with in-game skins and character creator items, as well as a physical limited-edition capsule collection,” the brand explained. 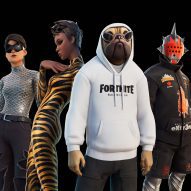 Last year, Burberry launched its first digital products with the release of Sharky B and a line of digital clothes as non-fungible tokens (NFTs) – a blockchain-based certificate of ownership.

However, Burberry: Freedom to go Beyond marks the first time that the luxury British fashion house has partnered with a video game for a digital capsule collection.

Unlike digital pieces that are sold as NFTs, the virtual clothes from Burberry: Freedom to go Beyond can be re-sold.

A number of fashion brands are turning to online video games to launch clothing collections.

Online gaming and social platform Roblox’s vice president of global brand partnerships Christina Wootton recently said in an interview with Dezeen that she believes virtual clothes worn by avatars are becoming more important than real garments to many users.

Roblox housed a virtual exhibition for Italian fashion house Gucci called Gucci Garden on its platform, while other fashion brands that have created in-game collections include Balenciaga.

Images and video courtesy of Burberry and 2022 Mojang AB.